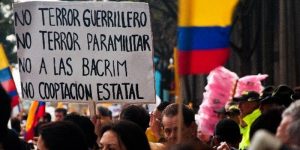 The signing of the 2016 peace agreement in Colombia made international headlines, but what happened next? Join us for an evening with perspectives on how investing in people’s health has become crucial to building a stable and brighter future for Colombia. Chat with international experts about the impact of the decades-long conflict on the nation’s health, and hear from community health workers and ex-combatants themselves on their hopes and dreams for the future.

The signing of the peace agreement in 2016 between the government and the largest rebel group (FARC) in Colombia generated great hopes of bringing an end to over 50 years of armed conflict in the country. Since then, health has played a major role in efforts to build a stable and brighter future for the Colombian people.

Join us for an exciting panel discussion with international scholars and artists presenting their views on how people’s health and the provision of healthcare are being experienced in “post-peace agreement” Colombia, and how investing in health could keep contributing towards building sustainable peace. Panelists will reflect on what the main physical and mental health consequences of the conflict have been for the Colombian population, and how these can be addressed; the government’s response to the reintegration of ex-FARC combatants into civil society; and the experiences and dreams for the future of those tasked with delivering healthcare to some of Colombia’s most remote and conflict-affected communities. After the panel discussion, there will be an opportunity to chat with the panelists in a relaxed atmosphere to get a unique insight into their work and learn more about the modern Colombia.

The event will also showcase, through interactive audio-visual displays, collaborative work led by researchers from the University of York and University of the Andes into the health impacts of the Colombian conflict, including an interactive timeline of the conflict and interviews with community health workers, government officials and ex-FARC combatants.