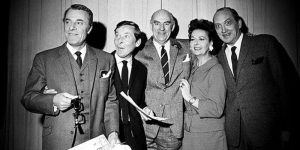 The Department of Sociology invites you to join us for an exciting lecture on Polari, to be given by Professor Paul Baker.

“Troll in! How bona to vada your dolly old eke!” Polari was a form of language spoken mainly by British gay men in the first half of the 20th century. Homosexuality was “the love that dare not speak its name”, being illegal in the UK until 1967, so Polari acted as a secret code, enabling gay men to conduct conversations in public places without fear of discovery. It was derived from a wide range of sources including language spoken by sailors, tramps, street performers, market traders and fairground and circus people and was popularised in the 1960s in the radio comedy series Round the Horne. By the end of the 20th century it had fallen into disuse although in recent years has been rediscovered by a new generation who have employed it for very different reasons to the original speakers. This lecture traces the rise, fall and rise again of Polari, from its 18th century origins to the present day. As a forgotten language of camp humour, this lecture gives a voice to a despised class of society who lived through much more difficult times to our own.

Paul Baker is Professor of English Language at Lancaster University. He has carried out research on Polari for 20 years and has written several books on LGBT language and history.