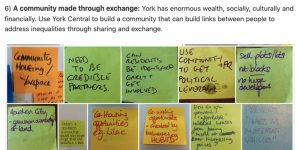 My York Central generated the idea that York Central should be ‘a community made through exchange’. How might we design for this?

Big ideas emerged from the My York Central discussion. That York Central should be ‘a community made through exchange’, a place where housing is forever affordable, where people and play come before cars, and with public spaces which catalyses York’s creativity and innovation. Ever since those ideas emerged we’ve been having discussions about how to bring them to life on York Central. We’ve been asking how might we design a neighbourhood where the economic and social relationship as well as the buildings embody these ideas. The working title we’re using to hold these ideas is a Co-Owned Neighbourhood.

• Can we design for a new built environment, social relations and an economy?

• Can we proactively use the wealth that exists in York (socially, culturally and financially) to address inequalities?

• What are the precedents for this? Are there developers who can help us make this happen?

• How can we draw together different legal and financial vehicles – from community land trust, co-housing to community investment share issues?

Join the discussions, hear from innovative projects elsewhere and help shape the next steps for this big idea for York Central.